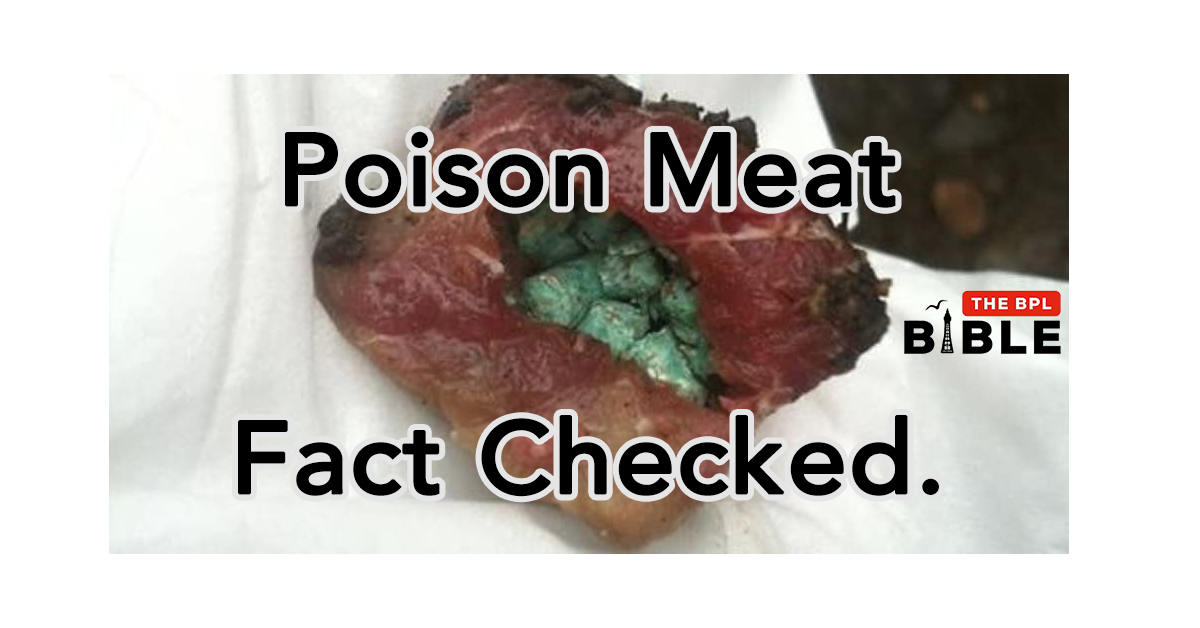 A resident who lives near Mowbray Drive in Blackpool has taken to social media to warn other local residents to be careful when out walking their dogs. In a picture posted on some local facebook groups tonight – there appears to be greenish poison inside a piece of meat. The claim is that the meat was found near where our base is – so we decided to take the story up. 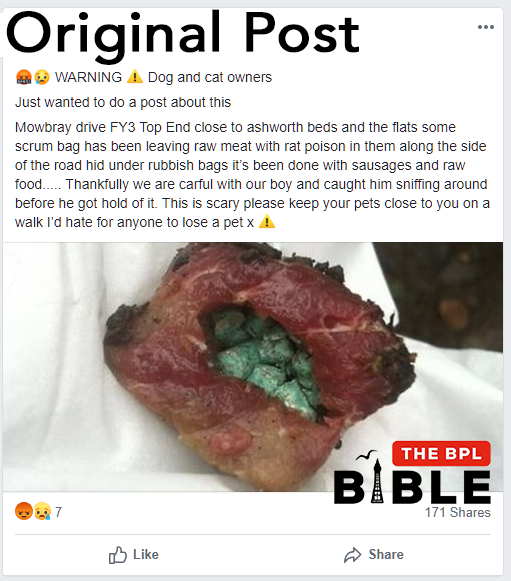 Our first port of call was to check the image in the post which you see above.

It’s one of the easiest things you can do to check the authenticity of a claim with a picture in it. Google reverse image search. You save or screenshot the image – head to a google image search in a new browser tab – click the little camera icon and then upload the picture you want to find a match for. Let me tell you know – it’s pretty good at it’s job.

This is the result we got back.

The first result is from an article published in Pinneywood in USA from 2013.

The image is Identical. It’s too much of a conincidence.

Loaded up with this information We started to reach out in the comments to the person who had posted the picture in local groups – it wasn’t long before we had a short discussion in private messenger.

We asked if the picture was taken by the person and if it was them who found the meat.

Our reply read that it was passed on from an acquaintance on facebook  (private post) but because of the proximity of the issue to their home – it seemed credible and a little scary. Fearing for the safety of theirs and neighbours dogs – the decision was made to spread the word. We’ve seen screenshots of the post and we believe that the person who posted in the local groups had good intentions.

It’s an easy thing for anyone to do – read a compelling story and want to make sure no-one else is injured by potential poisoned meat.

The issue now for us as a media and news organisation is to report on this accurately and fairly. We are classifying this as a false report with good intentions. It’s an example of how a chain of communication can be only slightly augmented to give a terrifying new meaning to someone’s story. When we started the BPL Bible over 5 years ago – one of our first articles was a SCAMBUSTER type about a picture of cocktail sausages which had nails in them – reportedly found in stanley park – turned out to be the same thing as in this instance – a picture from google and a scary story to go with it.

It would be an absolutely massive coincidence that someone could replicate exactly the picture taken in america over 6 years ago – on Mowbray drive today… and the fact that our new source is now referencing us to another profile which doesn’t have much information publicly available about it at all – we’ve reached a dead end in finding the source in order to verify this claim. But It’s more important to speak to someone classed as reliable – like the authorities.

We can and will contact lancs police tomorrow to find out if they have received any reports about poisoned meat found on Mowbray drive and we will also contact our sources in Blackpool Borough Council too.

Ultimately if you want to prevent your dog from eating anything on the streets you could choose to use a muzzel. Some dog owners wouldn’t dream of seeing this as a protective device for a dog but that is the best way to prevent a dog from eating foreign objects. You could use one of those cones that the vets give to chubby dogs who need to limit what they eat… Who wants to take a lamp for a walk though?..

Another helpful way to protect your dog is to keep a keen eye on the pavement ahead (using a good bright torch if it’s dark) and don’t let the dog get too far ahead on a retractable lead. Only let your dog off the lead in a place where you are confident that it’s safe. You can do a perimeter walk and search an area first if you’re really worried.

If you do spot anything suspicious you can contact the police to report it – the local council who would likely send out a dog warden or the RSPCA who would ultimately put a prosecution in against anyone who successfully poisons an animal in such a malicious way.

If you see a claim and you’re not sure if it’s real or not – before blindly posting it AS real – feel free to drop us an inbox or an email and we’ll gladly do some investigating on your behalf.

Please look after your pets x

If you would like to add your business to our online directory – please email newsdesk@thebplbible.co.uk or inbox us on our Facebook Page