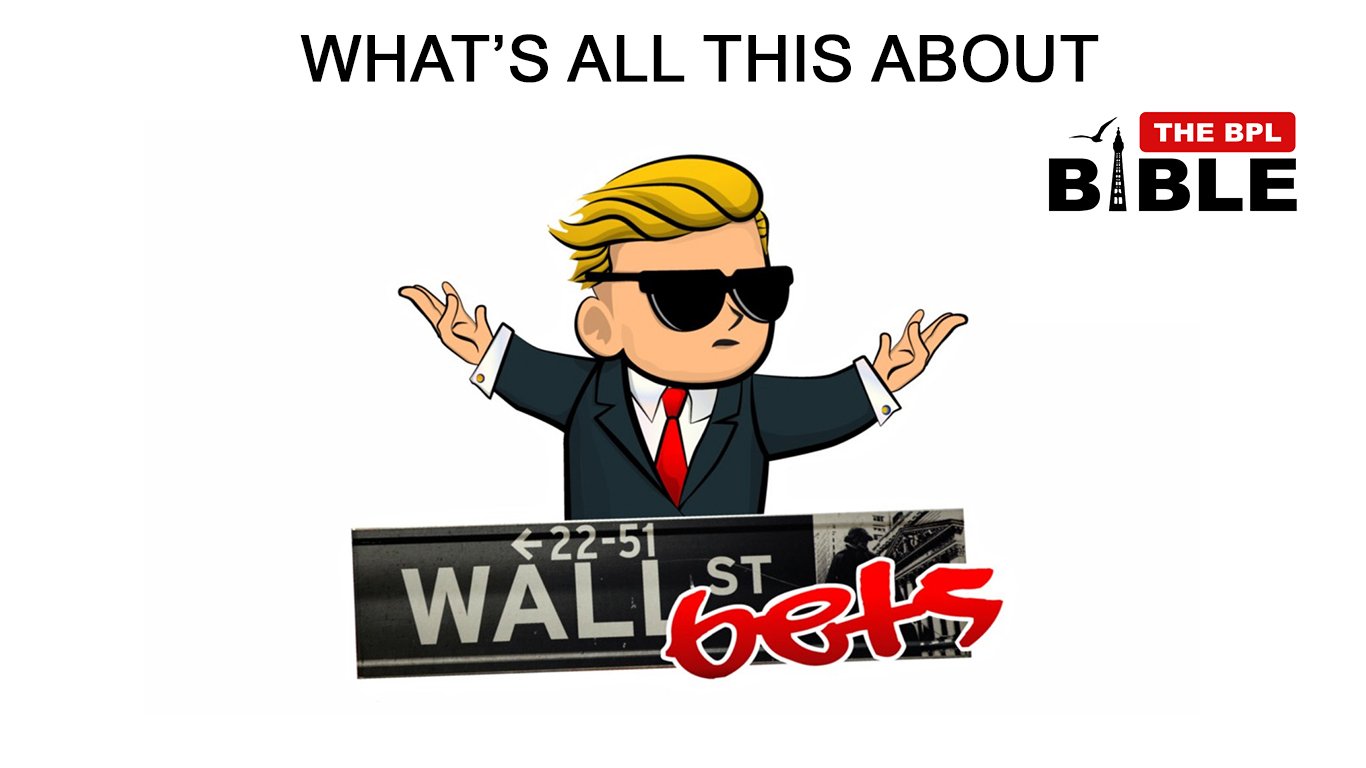 If you’ve been hiding in a bunker since last weekend you’ll likely not have heard about Wall Street Bets, Game Stop or any Hedge funds whatsoever…

Well – It’s a pretty big deal to be fair  – Here’s a blunt and colourful description of the action in the USA so far which has been seen on a number of profile posts around Facebook accompanied by the profile picture of this character.. 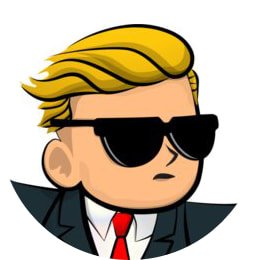 Begin Quote “So this hedge fund called Melvin Capital wrote out some douchey article about how the smart investment move would be to short-sell GameStop stock. To put it simply, short-selling is essentially gambling that a stock’s price will drop. If it does, you make money. If it doesn’t, you end up paying out money for however much it goes up.

Well, this little article that Melvin wrote pi$$ed off a dark, dank corner of the internet called Wall Street Bets. WSB is a hive of Ritalin-addled lunatics who treat the stock market like a casino. These dudes will regularly gamble their life-savings on a single trade. It’s a glorious thing to watch.
The WSB crew has a weird fascination with certain stocks.
They call them “meme stocks.” Tesla is one, AMD is another, and GameStop, arguably, is the most weirdly beloved meme stock. So for reasons that make sense only to the degenerates on WSB, Melvin trying to short-sell their meme was a declaration of war. 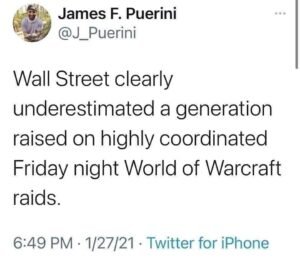 WSB decided to do a “short squeeze.” This is when you see people trying to short a stock, so you buy up that stock, and you get a bunch of other people to buy up that stock. With each purchase the price actually goes up. Since Melvin was trying to short the stock at a price of $20 per share, WSB wanted to get it as high above that price as humanly possible.
They got it up to $200 per share.
This means Melvin has to cover over $180 per share they bought. This came out to billions. Fu**ing. Billions.
Melvin Capital, over night, was suddenly facing bankruptcy.

Think about that. A bunch of self-identified degenerates on a website were able to tank a Multi Billion Dollar hedge fund.
Well, the rich and powerful don’t like seeing the plebeians messing with one of their own. So Point72, another hedge fund, teamed up with a few other little funds, and they injected around THREE BILLION into Melvin Capital to keep them from spiralling.
Essentially this meant the billionaire hedge fund crew were banding together to fight back against Wall Street Bets. And WSB just said “okay, no problem.”
Today the stock for GameStop is at $325 per share.
Melvin Capital lost all of that three billion they were given. It’s gone. They’re still goosed. Point72 gave a little over a billion of that injection, and that means that fund dropped from 17 billion to 16 billion. That means in less than 24 hours WSB managed to all but ensure one hedge fund will die and drop the value of another by 6% so far.
And remember, WSB are just a bunch of jackasses on the internet.
They aren’t hedge fund guys or investors at all, they aren’t millionaires or billionaires. 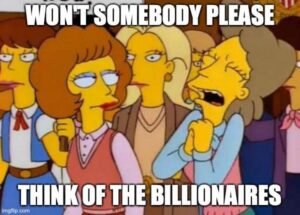 This is literally being done by self proclaimed “morons” and meme warriors with a phone app coordinating to ruin billionaires’ lives; because they can.
What we’re watching here with GameStop stocks is a bunch of rich people who are getting jacked, purely for entertainment, by the kind of middle-class and poor people they regularly lobby against and treat like this. This “eat the rich” via phone app. It’s “damn the man” with a meme-stock.
And because whoever is writing our reality lost all sense of subtlety after 2020, the icing on the cake is that the app the WSB crew are using to pull this off is a stock-trading app called Robin Hood. Yeah, as in steal from the rich and all that jazz. End Quote”

So aside from all that some of the Wall Street Bets traders have now chosen alternative platforms after the robin hood app was forced to cease all buys on the game stop stock and a few others that were trending because they clear their stock through a third party who didn’t like what was going on (ie they closed ranks on Wal Street Bets using robin hood) There were also some concerns about liquidity raised with the relative size of the company behind the app and the amount of money new users had put in.
In many ways this is a sort of direct action, a modern day revolutionary war fought on a financial battlefield. Real people are volunteering their assets in a fight against others who are dominating and seemingly controlling whole sectors of economies and dictating which companies survive and who loses out.
Have we been looking at it wrong all along? 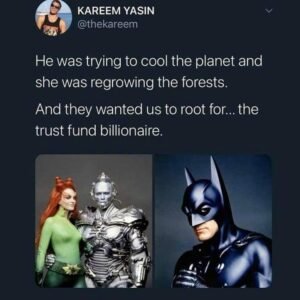 It’s not a new idea either, the Wall Street Bets subreddit has been around since 2017 and has seen plenty of action over the years – but this is by far the biggest battle they have been involved in – bringing them to the attention of the global media. Short selling stocks has become a trend recently too and it really didn’t take a genius to put together what the Wall street bets subreddit users have achieved.
Authorities in the United States have called for closer scrutiny on the actions that have transpired over the past week but many of the participants in this “attack on wall street” claim that hedge funds use tactics like this all the time. Why should it be any different just because the investors aren’t all rich independently – but acting like a hive mind instead… opposed to one central point moving all the independent investments around as the hedge funds do – the independent “nodes” are doing the moving themselves… 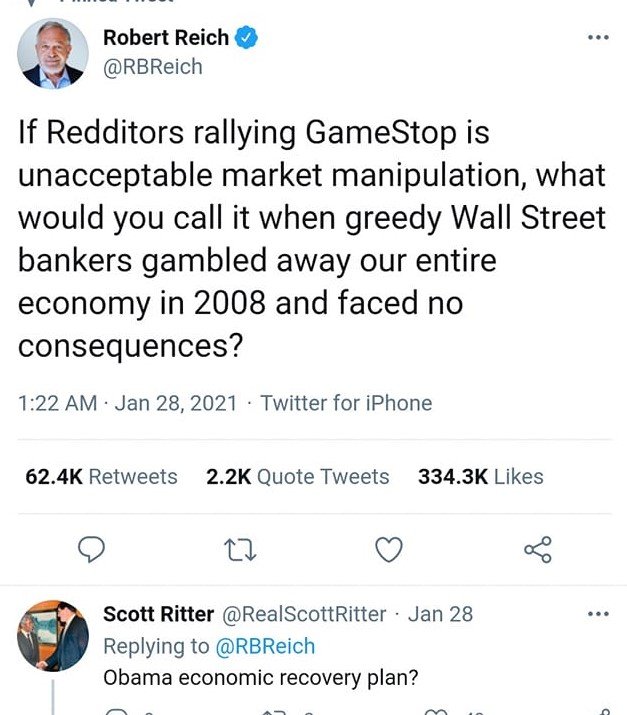 It may well be that this has greater ramifications for world finance..
We will update this page if any further developments arise.

If you would like to add your business to our online directory – please email info@thebplbible.co.uk or inbox us on our Facebook Page

You can also post about your local business in our Facebook Group – Blackpool Community Chat.
We would love to hear from local business owners about weekly or monthly news sponsorship deals.

You can help to support our local media outlet during these difficult times by pledging £12 per year for a voluntary subscription.

We would especially appreciate if local business owners would get behind this too in order to help us build our FREE local news & media business. – See link in the footer for more details