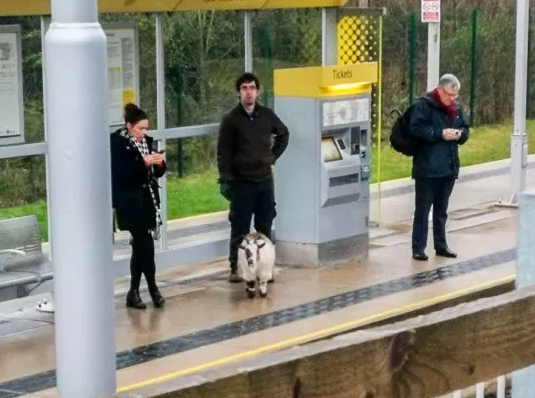 This isn’t even a joke and it’s probably the funniest story we’ve heard this month.  Imagine waiting for a tram in Blackpool to find a goat standing in the queue because that’s exactly what happened to these commuters in Manchester.  Obviously unfazed by the sight of a goat waiting with them on the platform behind the yellow line, commuters are pictured standing around as though nothing out of the ordinary is going on.

Meet Belle. Belle is a Pygmy goat and she had gone missing from her home, which is a farm located in greenfield, Sadlleworth on Monday.  This is 25 miles away from the tram stop where she was found in Sale, Greater Manchester.

Belle’s owner, Julie explained that she believed that the goat had been stolen to have got so far away from home.  She’d certainly never taught Belle how to use the tram network anyway. In additon, the gate at the farm was open and the electric fence had been dismantled in part.

After believing the goat to be long gone, Julie was elated that a member of the public had called Louise Field from the Dogs 4 Rescue charity in Salford.  When louise arrived at the station she was amused to find that the other commuters were standing around on their phones not taking any notice of the unusual looking passenger waiting alongside them.

Julie collected the goat and she has now been reunited with her brother Jingle back on the farm.